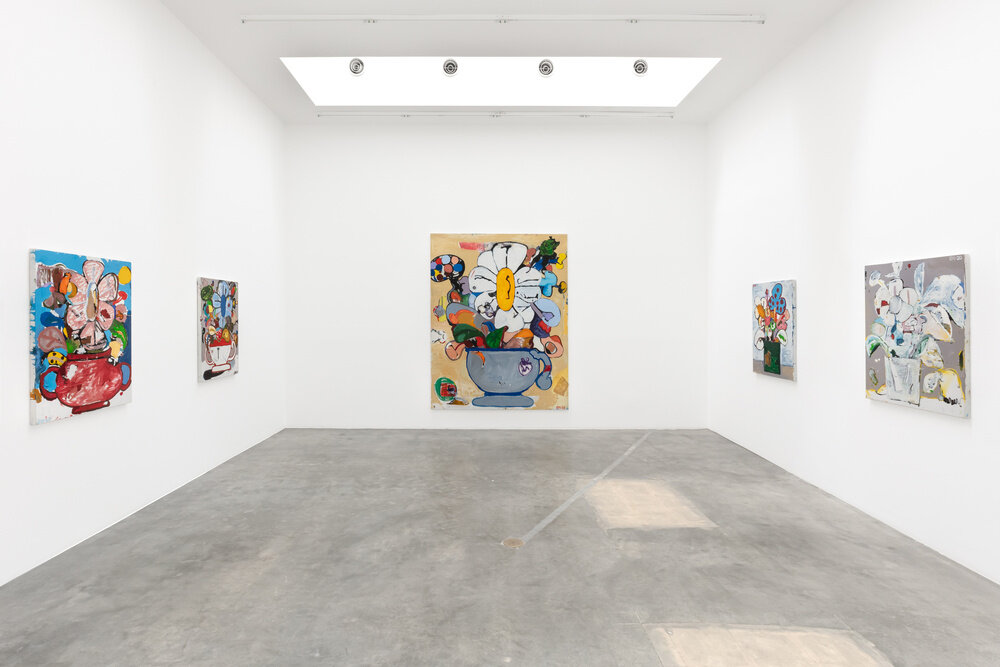 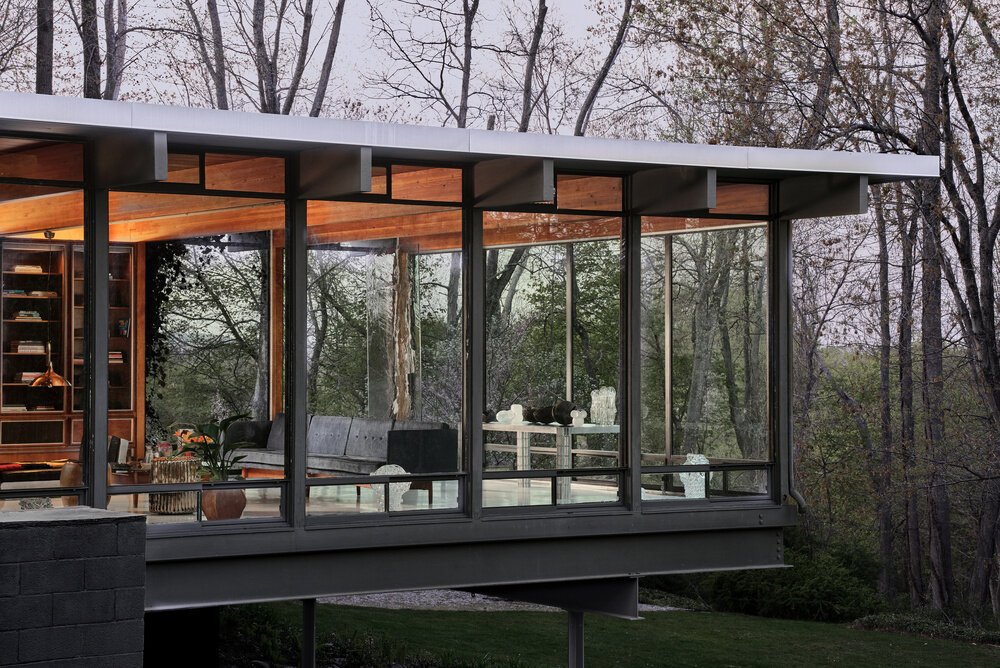 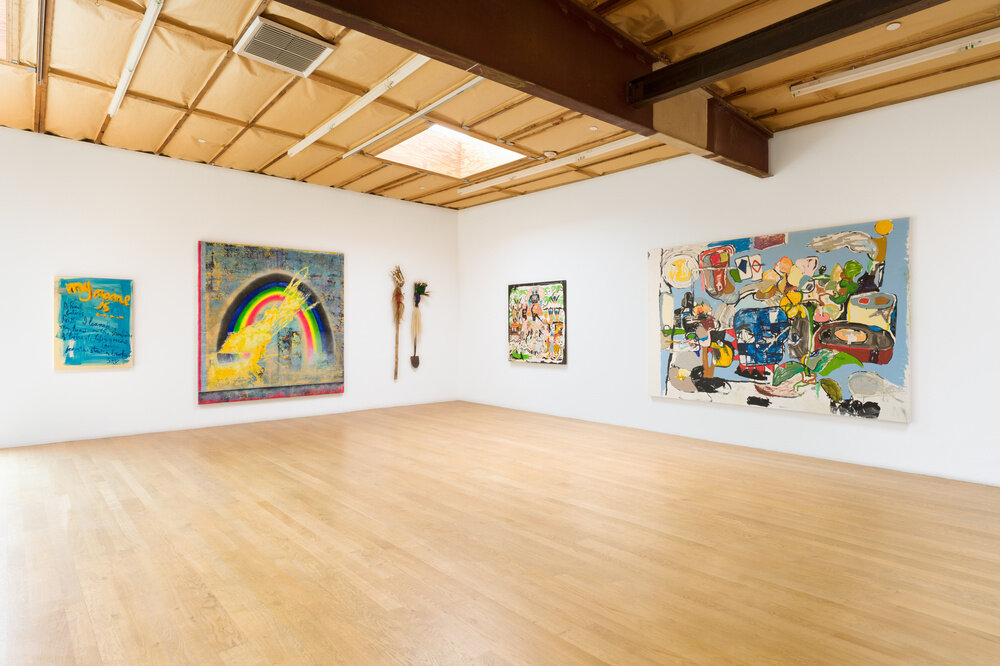 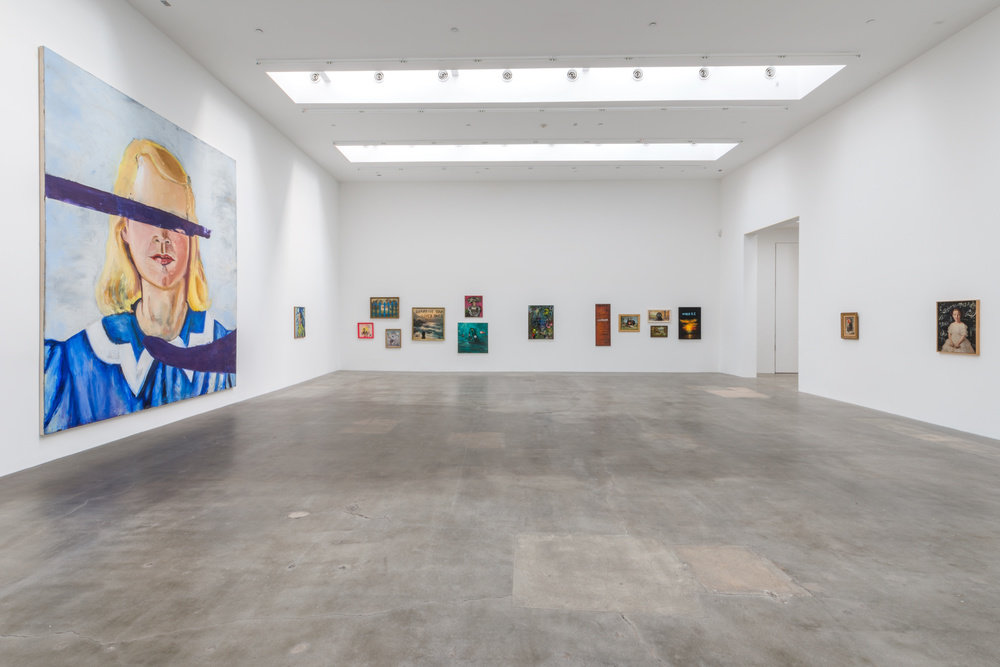 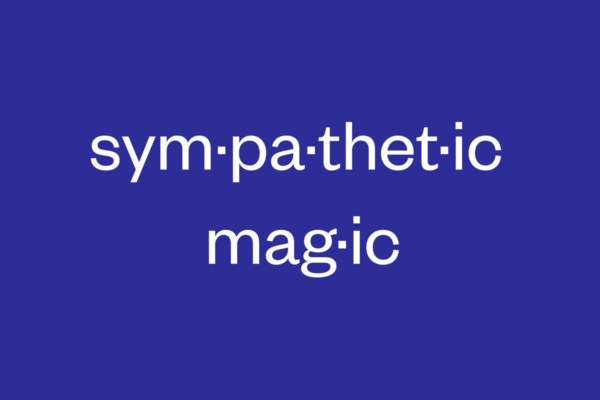 Great art should make itself available to all sorts of oddball interpretations and, by that metric, painter Eddie Martinez surely qualifies. But he’s not just a painter—he’s a sculptor, as well as a maniacal draughtsman. An urgency, earnest and searching, pulsates through all mediums he explores, whether it’s a corkscrew line scratched from a ballpoint pen or a lobster buoy hopscotched into an assemblage. The paintings, rotten with spray paint and acrylic, oil and enamel, depict blockheads and bulls, pinwheels and broken skies. However, his most unique quality might be the reverse anthropomorphism his compositions seem to conjure. You look at a canvas and can identify the setting sun—or is it a tennis ball? You see the record player here and the skull there, yet somehow your brain rejects the primal need to categorize. You abandon yourself to the wreckage of gesticulation. You submerge into the drama of brushstrokes borne from intuitive repetition. This is experimental innovation at work. Speed is progress manifest, for it denies the impulse toward stratagem.

Or in the words of The Wall Street Journal’s Kelly Crow, “[Philip] Guston to [Peter] Saul to Eddie Martinez = easy leap for me now.” Guston is an interesting precedent—definitely worth citing—in that he was the inadvertent destroyer of “schools” of art in his refusal to stay in one lane. (Hey, Mondrian made flower paintings, too.) No artist, at least not in this century, should be burdened by the notion of a signature style or the context through which they arise to a public stage. If he shares anything with the AbExers, it’s how Eddie tackles the surface with all the front foot momentum of a de Kooning. In 2015, Martinez was in a group show at Blum & Poe, curated by Alison M. Gingeras, which made the argument that his work follows in the legacy of the CoBrA art movement. This is a fair enough assessment if we can avoid the narrowing path which leads to caricatures.

Martinez’s practice isn’t inherently rooted in the abstract or representational, suffice to say that he plays for his own team. At its core, the art of Eddie Martinez operates along the fault lines of thought and association. Without thinking we are quick to triangulate elements of his pictures, much in the manner of a Rorschach test, but upon further consideration the choices made in his mark making give rise to the art historical, the autobiographical and ephemeral without succumbing to hierarchy.

Eddie Martinez (b. 1977, Groton Naval Base, CT) lives and works in Brooklyn, NY. Martinez’s unconventional practice has received growing institutional support, with numerous museum solo shows in recent years, including at the Museum of Contemporary Art Detroit and the Yuz Museum in Shanghai in 2019, a show of new sculptures and paintings at the Bronx Museum in 2018, an exhibition that featured a rotating display of his recent works on paper at the Drawing Center in 2017, and an exhibition at the Davis Museum at Wellesley College, MA in 2017. His works are represented in international public collections including the Aurora Museum, Shanghai, China; Bronx Museum of the Arts, Bronx, NY; Davis Museum at Wellesley College, Wellesley, MA; Hiscox Collection, London, UK; La Colección Júmex, Mexico City, Mexico; Marciano Collection, Los Angeles, CA; Morgan Library, New York, NY; RISD Museum, Providence, RI; Saatchi Collection, London, UK; and the Yuz Museum, Shanghai, China, among others.

On Eddie Martinez: A Walkthrough with Paul Schimmel