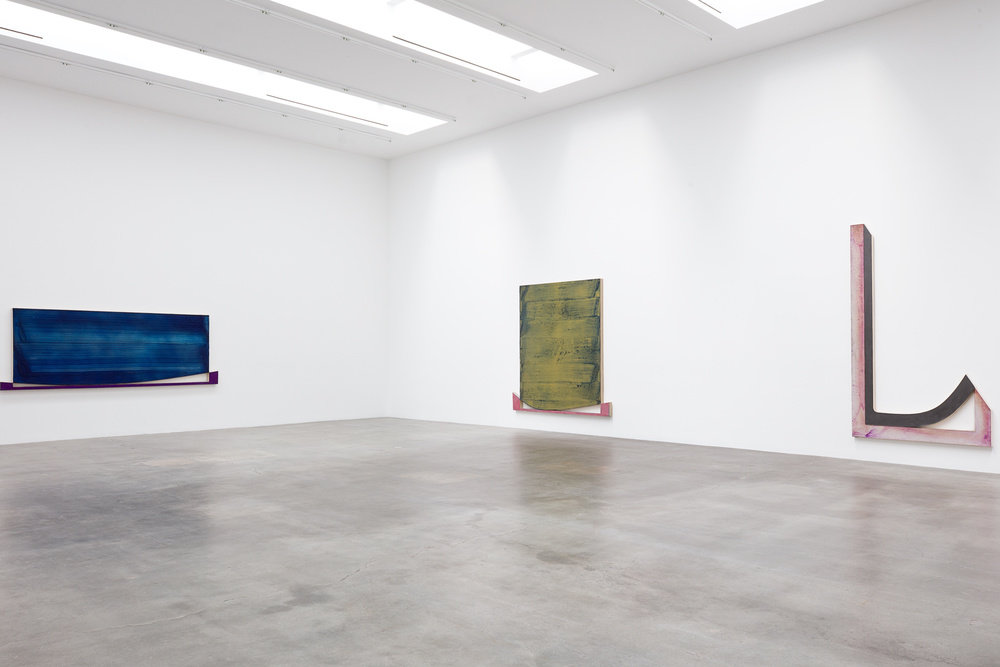 Harvey Quaytman (b. 1937, Rockaway, NY; d. 2002, New York, NY), a self-professed “classical modernist,” began his career in the 1960s at a time when painting had been declared dead. An under-recognized figure in the written history of modernist abstraction, yet always an artist’s artist with a wide range of influence, Quaytman was perceived through the lenses of Constructivism, Minimalism, and Abstract Expressionism. He was also influenced by such visual cues as Islamic calligraphy and the curved wings of airplanes and birds, references that emerge as his oeuvre shifted from the rectangular canvas to the monumental shaped canvases that are acknowledged as moving abstract painting toward a more sculptural form, reshaping the trajectory of American painting in the 1960s and ’70s. Known for these eccentrically shaped works as well as his later rust cross paintings, Quaytman was a master of color and texture. He skillfully poured paint, spreading Rhoplex over canvas with broad wallpaper brushes after dusting it with pure pigment that settled in thick, unpredictable strata. He later flecked canvas with glass or iron filings and used additives such as marble dust in paint he always mixed himself. He often worked years to find the perfect form for an image, and when asked by an interviewer what the point was of abstraction in a fractured world, he answered, “if you are able to concentrate everything you believe into your work, then it’s ethically and socially valuable.”

Quaytman’s first posthumous museum retrospective at BAMPFA in 2018 showcased the extraordinary trajectory and breadth of his work. Critic Gwen Allen, writing in Artforum, called it “a revelation” that offered viewers the opportunity to “marvel at the strange, beautiful objects he produced.” The exhibition catalogue (UC Press, 2018) offers the most in-depth scholarship on Quaytman to date, with new essays by art critic John Yau, the artist R. H. Quaytman (his daughter), and art historian Suzanne Hudson, who writes about the year 1966, when the artist began making shaped canvases and opened up the idea of “the armature as a fundamental element of a painting to further question.”

Harvey Quaytman | Against the Static