Blum & Poe is pleased to present a group exhibition entitled Mountains Carrying Suns, a selection of work by eleven artists from China, Japan, and Korea, including Kōji Enokura, Yukie Ishikawa, Kwon Young-woo, Kazumi Nakamura, and Nobuo Sekine, on the occasion of South South Veza OVR. The exhibition title refers to the eponymous painting by Zhu Jinshi, which serves as a starting point for understanding the vital cross-cultural relationships in East Asian art history that lie at the heart of Blum & Poe’s program.

Zhu’s industrious, sculptural application of oil paint on canvas is rooted in his experiences as a factory worker in Beijing during the Cultural Revolution (1966-76). Although Zhu is primarily known as a painter, his early years saw him experiment with sculptural installations that were influenced by his interest in Mono-ha, a group of Japanese artists who created ephemeral, site-specific installations of natural and industrial materials during the late 1960s and early 1970s. Among these artists, Nobuo Sekine explored topological notions of the deformation of matter and space by amassing giant quantities of earth and oilclay in outdoor and indoor locations, which subsequently led him to develop the Progetto series of proposals for monumental outdoor sculptures. Sekine’s works also inspired artist-theorist Lee Ufan to conceive new theories of phenomenology in a contemporary Japanese context, which provided a contextual framework for other artists, such as Kōji Enokura. Initially using oil and grease to discolor the floors and walls of galleries and outdoor spaces, Enokura later embarked on the Intervention series of stained cotton fabrics and wood panels. Meanwhile, Kishio Suga created assemblages that combine branches, stones, rope, glass, and plastic into infinite arrays of spatial and material relationships—describing them as the “activation of existence.” By contrast, Susumu Koshimizu produces modular wood-panel reliefs characterized by geometrical incisions and fields of Japanese pigment that reflect his decades-long search for a distinctly Japanese vernacular in contemporary sculpture.

Not only was Lee Ufan a pivotal figure in the formation of Mono-ha, but he was also highly influential among his peers in his native Korea. These artists sought an alternative to the ink painting traditions that dominated the peninsula in the 1960s through sustained iterative actions applied to paper and canvas—a movement that later came to be known as Dansaekhwa, or “monochrome painting.” Kwon Young-woo abandoned the use of ink and scratched the surface of the delicate, multilayered hanji paper with his fingernails. In his ongoing Conjunction series, Ha Chong-hyun pushes viscous oil paint from the back of the canvas to its surface, manipulating it with a brush or palette knife. Thanks to introductions made by Lee, the Dansaekhwa artists regularly exhibited in Tokyo, where they engaged in intellectual exchanges with Mono-ha artists and other contemporaries of the Japanese avant-garde.

The generation of Japanese artists that emerged after Mono-ha in the 1980s and 1990s were alternately influenced by or critical of their predecessors, as they sought their own methods of expression in response to a new era. Approaching painting through a socially conscious lens, the practices of Yukie Ishikawa and Kazumi Nakamura emerged in the context of the Japanese New Painting movement, which developed in parallel to American and European Neo-Expressionism. The compositions in Ishikawa’s early works originate from the forms she extracts from magazine and newspaper advertisements, which she enlarges, projects, and traces onto her canvases—paintings that can be interpreted as subtle critiques of consumer culture during the bubble economy. Nakamura sought to imbue his abstractions with references that extend beyond the autonomy of the canvas, from allusions to his childhood and his mother’s passing to social conditions caused by the Great Hanshin-Awaji Earthquake in 1995. Kenjirō Okazaki, the interdisciplinary artist and critic known for his award-winning publication Abstract Art as Impact, works in multiple genres including painting, reliefs, sculpture, architecture, and drawings made in collaboration with robots. During the pandemic lockdown of 2020, Okazaki expanded his Topica Pictus series of small abstract paintings, inviting viewers to travel around different places over time. Finally, through a diverse array of media, Yukinori Yanagi interrogates the politics of nationalism and institutional borders. In his series of ant farms that emulate national flags, ants burrow through the “nations” that house them. In the work on view in this exhibition, the ants have tunneled through Japan’s hinomaru flag, disturbing this powerful symbol of the rising sun.

Blum & Poe’s exhibition program is deeply committed to supporting contemporary art from East Asia. The gallery has been at the forefront of presenting artists from Japan since its founding in 1994, following Tim Blum's early years as an art dealer and curator spent in Tokyo in the early '90s. Originating in various museum-level historical survey exhibitions curated by leading figures within their fields, Blum & Poe has fostered relationships with artists ranging from the Korean postwar movement of Dansaekhwa, to pioneers of the Japanese postwar group Mono-ha, to those who carried forward artistic experimentation in Japan in the 1980s and ‘90s, and today. Blum & Poe opened in Tokyo in 2014 with a desire to further support its Asia-based artists, who represent a third of the gallery’s roster. Six years later on the occasion of South South Veza’s OVR, this presentation showcases a diversity in practices with works by eleven artists.

The premiere event of South South Veza is a live online auction in tandem with an online viewing room that features 40 international galleries whose programs champion the art of the Global South. South South seeks to address an imbalance in the art world framework by providing a means to explore alternative art centers within the broader geopolitical framework, and present a varied and dynamic worldview of contemporary art production. The live auction will take place on February 23 at 1pm GMT, 5am PST, and will raise funds for their not-for-profit partners: Casa do Povo (Brazil), Green Papaya Projects (Philippines), and Raw Material Company (Senegal). Bid on Zhu Jinshi's Thunder Resounds Through the Palace (2020) here.

Additionally, Blum & Poe will participate in a collaborative exhibition with Taka Ishii Gallery, Take Ninagawa, and MUJIN-TO Production. As part of this initiative, the works of Shinro Ohtake and Sachiko Kazama will be on view at Blum & Poe, Tokyo between the dates of February 26-March 19, 2021. 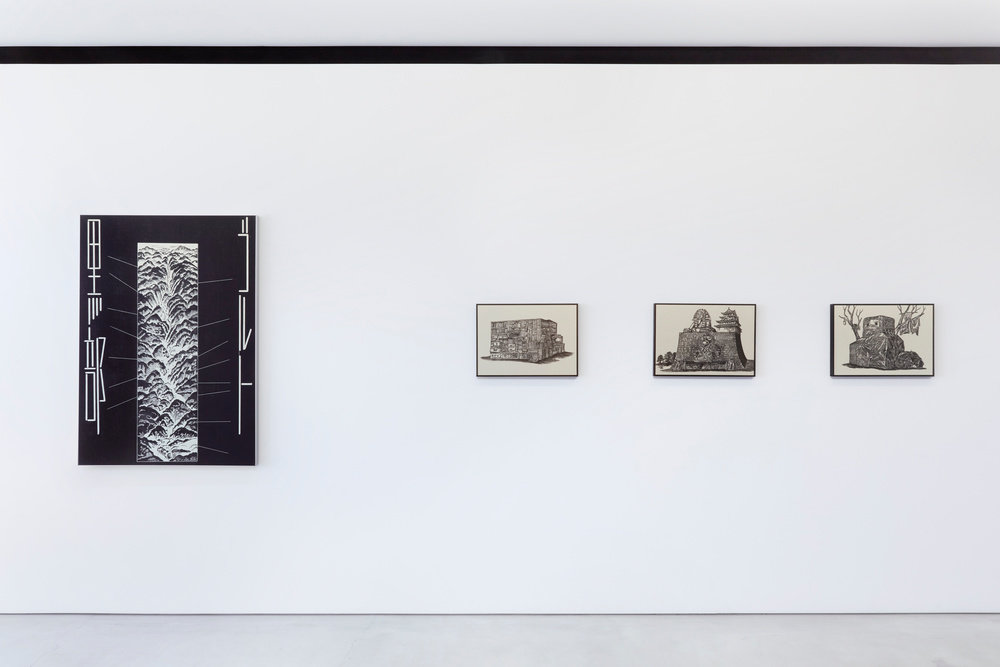 Our website uses cookies to improve user experience. Please click here to learn more.
By continuing to browse you are giving us your consent to our use of cookies.
I Accept
Blum & Poe, Los Angeles and Tokyo are open by appointment. Make a reservation to visit the galleries here. Visit Blum & Poe, Los Angeles on a SUMMER SUNDAY until August 14.