In the hallway of a New York townhouse, two sets of electric eyes lock in a gaze. They emit an energetic buzz that can be felt from the north end of the house to the south, in the groin and on the skin. The bodies of these mechanical creatures seem to have dissolved into radiating light.

Elsewhere, electricity moves inward: to an immersive digital field of floating orbs, frantic lines, and hulking humanoid forms, shivering and humping in an amorphous desert landscape. Things unpredictably crash and bleed into one another in an endless algorithmic flow. On the walls, smeared ink and awkwardly stretched canvases bear witness to the deadening effects of anesthetics on flesh and nerves.

In another room, a severed cable floats in a transparent cube. Nails cascade down the wall, frozen in their descent, while a man leaps in front of a camera that creates a multitude of bodies in his wake. Nearby, congealed air rests motionless. Opalescent and cloud-like, it forms a delicate arc across the bottom of a frame.

Up the stairs, the walls are lined with photographs. Some resemble anatomical runoff or blooming algae, while others are latticework of aqueous blobs. In these vestiges of pictures, water destroys the image rather than tempering the corrosive effects of darkroom chemicals. Layers of plastic and emulsion separate and degrade.

The entropic process of disappearance is everywhere in this house. On the way out, a jagged shard of bone whirs within inches of a skull. Beside it, a hand shakes violently up and down, dissolving into an indiscernible blur.

Technokinesis is organized by Jenny Jaskey and Andrea Neustein. The exhibition continues in Los Angeles, July 12-August 23, 2014. For five hours a day, the works at each location will hum in unison. 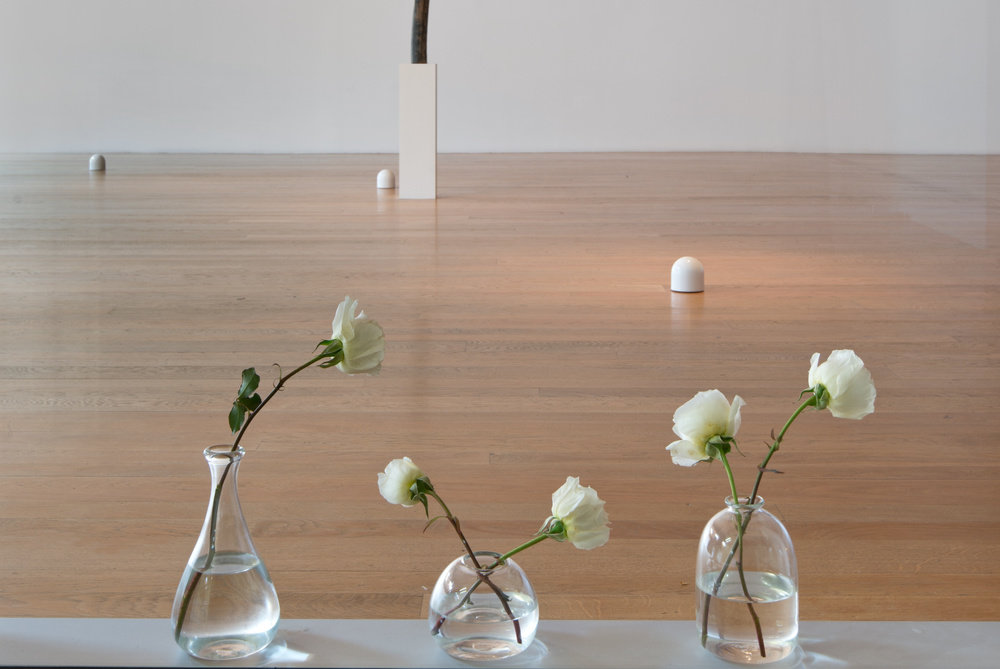