Blum & Poe is pleased to present The Avant-Garde Won’t Give Up: Cobra and Its Legacy, the second installment of a two-part exhibition which began in New York and now opens in Los Angeles, offering a broad and critical reassessment of Cobra—an essential postwar European movement named for the home cities Copenhagen, Brussels, and Amsterdam. The exhibition follows the solo exhibition of Karel Appel, one of the movement’s key protagonists, presented at Blum & Poe, New York in September 2014. Named after a seminal work by Cobra founder Asger Jorn (Danish, 1914-73), The Avant-Garde Won’t Give Up pays tribute to Jorn’s catalyzing role and to the movement’s enduring aesthetic and conceptual influence on artists working today.

The latter half of the exhibition, taking place in Los Angeles, will cast its view beyond the formal ending of Cobra in 1951 by following the political activities and aesthetic experiments of Asger Jorn through the 1950s to his death in 1973. Including later “modification paintings” (interventions or détournements on anonymous paintings bought in flea markets), abstract paintings utilizing unconventional materials, and experimentations with ceramics and textiles, Jorn’s later output shows the fruition of many of the ideas that first germinated in the Cobra period. While maintaining his exchange with Cobra artists, Jorn also widened his circle of collaboration and exchange with members of the Italian neo-avant-garde, such as Enrico Baj and Lucio Fontana, as well as artists such as Jean Dubuffet.

The Avant-Garde Won’t Give Up will argue that Cobra did not end with the formal disbanding of the group in 1951. In fact, Cobra’s ideas and aesthetics were only realized in the two decades that followed—blossoming into a relentless multinational, literary, political, and radically polymath exploration of numerous artistic media. In tracing this complex web of artists and ideas, the history that unfolds insists upon a more complex genealogy of one of the least understood, yet important movements of the last sixty years. This broad understanding of Cobra artists’ artistic and discursive output reveals them to be dynamic figures, whose legacy continues to impact the art of today. To this end, the exhibition in Los Angeles will propose a series of historical and contemporary juxtapositions by a range of living artists. This transgenerational presentation will underscore the urgency of this reexamination of Cobra—by viewing the movement’s groundbreaking experiments and ideas through the lens of the present day.

Bringing together rarely exhibited works by several artists who have not been seen in the US for decades, the realization of this exhibition has drawn upon the close, generous collaboration of numerous Cobra artists, estates, families, and private collections. The Avant-Garde Won’t Give Up also pays homage to the visionary work of the Lefebre Gallery. Established in New York in 1960 by John Lefebre and closed in 1986, this trailblazing gallery was one of the few to support and promote the Cobra movement in America.

In keeping with the exhibition’s assertion that Cobra has particular resonance with contemporary art practice, artist Julian Hoeber has collaborated with the curator Alison M. Gingeras on an exhibition design that reflects the innovative installations of the first Cobra exhibitions at the Stedelijk Museum Amsterdam in 1949 and at the Palais des Beaux-Arts Liège in 1951—both of these exhibitions were designed in collaboration with avant-garde architect Aldo van Eyck.  Hoeber’s own research-based practice investigates the intersection of architectural history, narrative and aesthetics—bringing an additional layer of transhistorical dialogue to this project.

As part of the run of the Los Angeles exhibition, there will be several events including Art Center College of Design, Pasadena will host artist Jacqueline de Jong and curator Alison M. Gingeras in conversation as part of the graduate art lecture series on Monday, November 2. A book launch for the new monograph Shinkichi Tajiri: Universal Paradoxes (Leiden University Press, 2015) will be held at the gallery on Friday, November 6, 5-6pm.

In conjunction with the exhibition, Blum & Poe will publish a catalogue that will include new essays by the exhibition’s curator Alison M. Gingeras and three leading scholars who represent a new generation of art historians specialized in Asger Jorn, Helhesten, Belgian Revolutionary Surrealism, and Cobra—Marie Godet, Kerry Greaves, and Karen Kurczynski. The book will be co-published by DelMonico Books • Prestel and will be available in Spring 2016. 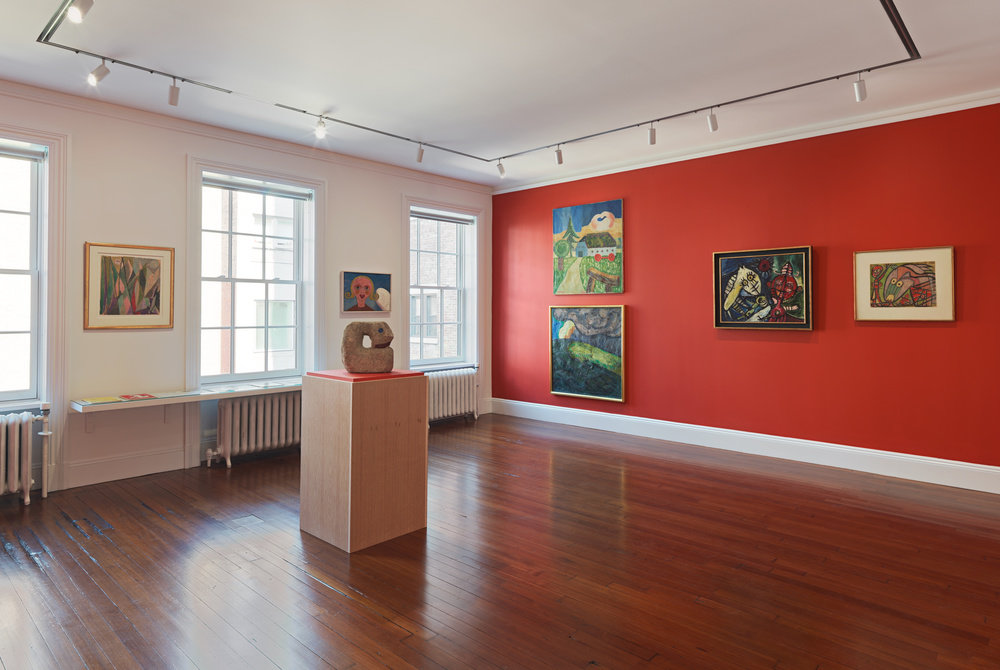