With Indoor Gatherings Still Restricted in England, the Liverpool Biennial Has Opened Its Outdoor-Only Program First
By: Naomi Rea

The Liverpool Biennial, which officially opens to the public on March 20, is the first major exhibition to take place in England in 2021.

Initially slated to run last summer, the postponed opening was hampered by ongoing lockdown restrictions. But organizers have decided to push ahead and open an outdoor-only section of the show ahead of anticipated relaxations on restrictions later this season.

More than 50 artists, including Black Obsidian Sound System, Larry Achiampong, and Linder, are taking part in the full exhibition, titled “The Stomach and the Port,” which references Liverpool’s maritime history.

It includes 47 new commissions of sculptures and installations, a selection of which have been peppered across the city’s public spaces. Now on view are new works by Rashid Johnson, Jorgge Menna Barreto, and Teresa Solar.

“The first ‘outside’ chapter presents works that connect bodies and experiences to key places, past and present, speaking of the movement of humans across the sea and proposing new understandings of the relationships between the body and nature,” curator Manuela Moscoso said in a statement.

Already installed new commissions include Larry Achiampong’s Pan African Flag For the Relic Travellers’ Alliance, which is being flown in 10 locations, and five kayaks sculptured by Teresa Solar in the shape of human bones.

Rashid Johnson has created a large-scale totemic sculpture titled Stacked Heads, which draws on his ongoing “Anxious Men” series. The new work is made of two bronze heads planted with yucca and cacti plants.

Elsewhere, feminist artist Linder has created a street-level billboard commission called Bower of Bliss. The artist’s photomontages, which she will also present at Tate Liverpool for the biennial, juxtapose everyday images of women from fashion magazines with graphic pornographic images and other archival materials.

Moscoso says the show, in sum, is about “change and healing following the universal shifts we have all experienced in this past year.”

The biennial also has an online portal through which you can find information about participating artists, as well as sonic and digital commissions including a series of podcasts by Ines Doujak & John Barker and an artificial intelligence project from art duo Ubermorgen. 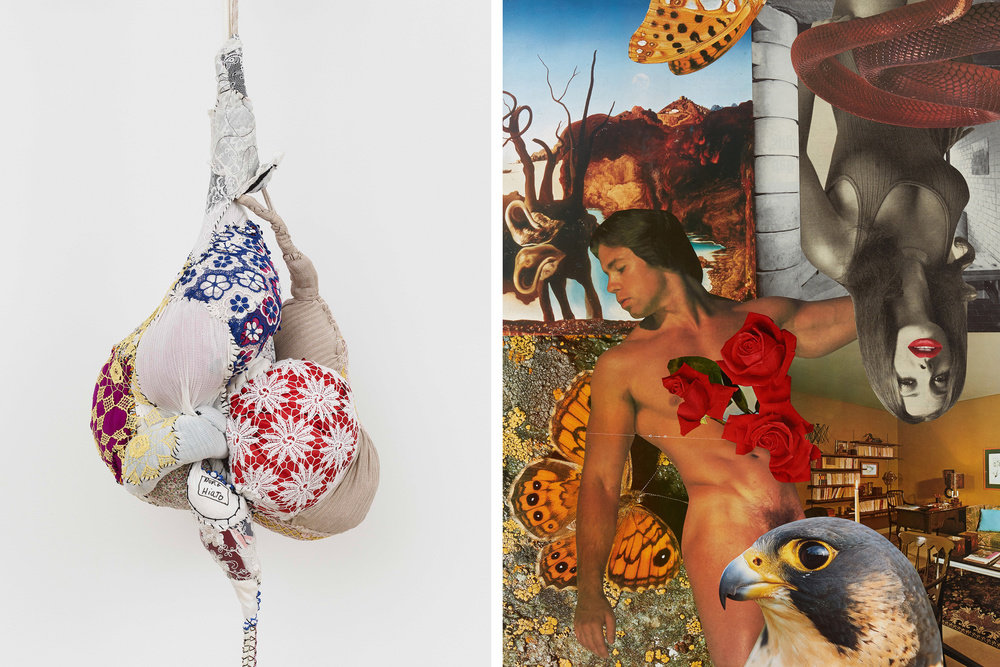