I connect with Stephanie Cristello from Canada, where she is quarantining for 2 weeks before being able to come back to the US. She was in Denmark before, overlooking her most recent curatorial job: Saturnine at Kunsthal Aarhus. This was Cristello’s first singular painter exhibition, showcasing works by Los Angeles-based artist Theodora Allen.

The exhibition is accompanied by a book of the same name, Theodora Allen: Saturnine. A catalogue published by Motto Books made up of fictional texts and critical essays. The book and exhibit alike investigate the use of symbols in art, literature, music, film, and history, reflecting on the history of Saturn, which has become the symbol for melancholy, from ancient myth and the Middle Ages through to the present. Although they go hand in hand, they are not one and the same, explains Cristello, “the exhibition is not a carbon copy of the book, and the book is not an exhibition catalog that way.”

The exhibition ran from May 14 to July 18, but she is not hesitant to walk Flaunt through the exhibit, going in-depth about the book, Theodora’s works, and her curatorial process.

You recently curated the solo show by Theodora Allen at Kunsthal Aarhus, titled Saturnine, how did the exhibition come about?

I am a writer and a curator, but I would say I am a writer first and foremost, so each of the exhibitions I would do came with a publication, either a journal or a book, so the exhibitions would serve as beginnings for writing. I started on an essay of [Theodora’s] work about this painting that she had called “The Cosmic Garden I” (2017), which featured this fallen Saturn, which is on the cover of the book, and is the main piece in the exhibition in Denmark. I started writing about this idea of emblems, basically reading her works as a painterly language of history of symbols and motifs that have been generative throughout her practice but also throughout art history. And that essay turned into this very large text, but ended up being the first chapter of the book. So while that was happening I was also invited to curate at the Kunsthal Aarhus for a year in Denmark, and when they asked me to propose an artist that’s when I proposed doing a much larger exhibition that could result from the book. That was really the conception of how the show got started, and then in the process of doing the research for the book and putting everything together, I did  multiple studio visits with Theodora writing about all of the facets of her practice over the last 5 years and the end result is this institutional solo exhibition that she had in Europe, in Denmark

What can you tell us about the exhibition?

The way we organized the exhibition is that we sort of built a wall, and the first room when you enter is for symbols of the natural world, so you’ll see planets, hallucinogenic plants, snakes, hourglasses, candles...and in the second room, which is just divided by a wall on the opposite side of that Saturn painting that is really imposing in the space, there is this sort of machine room, which is where the new paintings of the bolts are [the "Life Thread" series], and it has elements of the natural world, like the Datura plant, which is also known as devil’s snare or jimson weed. It’s this type of wildflower that also used to be used in the middle ages as a hallucinogenic for medicine but still grows throughout Los Angeles today, so it’s sort of this space where old meets new.

Theodora made 4 new works. There were 13 paintings in the exhibition in total, 9 of them were loans and borrowed from different collections. We basically wanted to represent one or two works for every body of work that she has, she works very serially but also will come back to certain subjects over the course of a few years to give the audience a certain sense of these recurring motifs.

How did you discover Theodora Allen’s work?

I had actually discovered Theodora’s work in 2019, at an exhibition that was in New York. I wasn’t familiar with her practice before, but she had a solo exhibition at Kasmin in NY, and I saw the show and I was actually working in a group exhibition by the same name of this exhibition that we did in Denmark, which was called Saturnine, and it was about the history and relationship between melancholy and the planet Saturn, and that group exhibition had a number of artists, and I was looking for one more artist to join the show and I discovered Theodora’s work. And so she actually made a painting that went into that exhibition at my space in Chicago, called Chicago Manual Style.

Why did Theodora’s work stand out to you so much?

It was a really interesting research to embark on with an artist like Theodora that engages in this sort of timeless, eternal symbols and I don’t think she is necessarily a representational painter. I think she makes image paintings, which was really interesting for me, that they are figurative in some ways but they are also these sort of imagined landscapes and proposed images and ideas that seem familiar but no one has ever really seen all together in these sorts of compositions. That was what I found really special about her work. It’s this sort of icon painting that we haven’t really seen since the renaissance, but also fueled with contemporary symbols as well, so they could only really exist now, but they do have this familiarity and history to them, that when you see them they bring up all of these other interests and subjects throughout not only art history but histories of medicine, or perception, or psychology.  They transport you into these other realms. They have a special quality that I don’t think many other contemporary paintings have at the moment.

Tell us a little bit about the book.

The first chapter was about this idea of Saturn, and introducing it as what was the symbol for melancholy for the ancients, establishing this idea of the four humors that Aristotle had come up with, which is that each of the temperaments of humankind can basically be related to four planets, but also an element of your body.So for Saturn it was melancholy and the spleen, if somebody had apathy it was caused by the moon and it had to do with your throat, if somebody had a happy nature it was linked to Jupiter and the blood, and then for Mars, it was aggression. That history goes unchanged for about 2000 years, until the Middle Ages, where all of the others sort of die out in common practice, but Saturn remains. And so you’ll start having the word ‘saturnine’ to mean sadness, and it enters language and enters our consciousness in a different way.

The second chapter is one of my favorites. That’s where we go into the history of the color blue, and how blueness is an emotion but also this incredibly seductive color that artists have engaged with. It goes through music and film and the history of using the color blue. One of the things that Theodora and I both loved is that blue is this color in nature that doesn’t really exist, there are very few things in nature that are blue, except for atmosphere, that basically denotes distance. It’s a color that you can never reach.

And then there is a chapter all about representations of music in painting, which was really based on her inclusion of guitars, which is a more contemporary instrument, but also ancient instruments like the lyre, which is a harp that was played by a lot of figures in Greek mythology, so it sort of puts the ancient greek myth next to the zeitgeist of 1960s and 70s California, where all of those aesthetics come back to life. It’s this aesthetic that comes back every 200 years or so, in popular music, and it gets closer the closer that we get to the present. This idea of aesthetics coming in and out of cultural consciousness.

How do the book and the exhibition relate? How are they different?

Not every single one of the chapters is worked into the exhibition, it’s more a companion piece to the exhibition more than anything else. But I would say a lot of those histories and symbols that we cover in the book do make their way into the solo exhibition as a full picture of her practice. Because we were working on this book over the course of a year, I would say they go pretty hand in hand, but the exhibition is not a carbon copy of the book, and the book is not an exhibition catalog that way. I think they both do different things. In the exhibition we wanted the paintings to have space and tell their stories too.

Where do you draw inspiration from for your texts and exhibits?

Inspiration for me is mostly through the lens of classics and the humanities. So I often write about Greek mythology or ancient narratives, but I only write about contemporary art. I think Greek mythology basically gave us the blueprint for any type of situation that could exist, so I like to often use these frameworks in order to apply them to present issues or phenomena in ways that basically import those old histories into the present while helping us learn about art and the human condition a little more closely. But it’s very much based in myth, legend, and the phenomenon that surrounds us going deeper into why that specific thing exists.

I'm also incredibly interested in language, and why words have the meaning that they do, so a lot of the texts that I write are often poetic, but also I try to take the concept or the form that an artist will have in their work and adopt that same form within my writing practice, so the text will take the form that the artist dictates. I guess it’s a bit like method acting, where you take on what their ideas are and how they go through the world, and how they come up with images, and I want to give the experience of reading a text that is as close to the work as possible. So essentially translating visual art into text that can give an image into somebody’s mind, or that their experience of reading is as similar as it can be to seeing a show or seeing a work of art.

What is your favorite fact about Saturn that you found while writing the book?

I think it would be that even though Saturn in ancient times (in Roman myth, or also known as the Greek God Kronos, which means time) was male, the personification of Melancholy (a curse that the planet caused) in literature and art were all female. An anti-feminine sentiment remains very much relevant today… 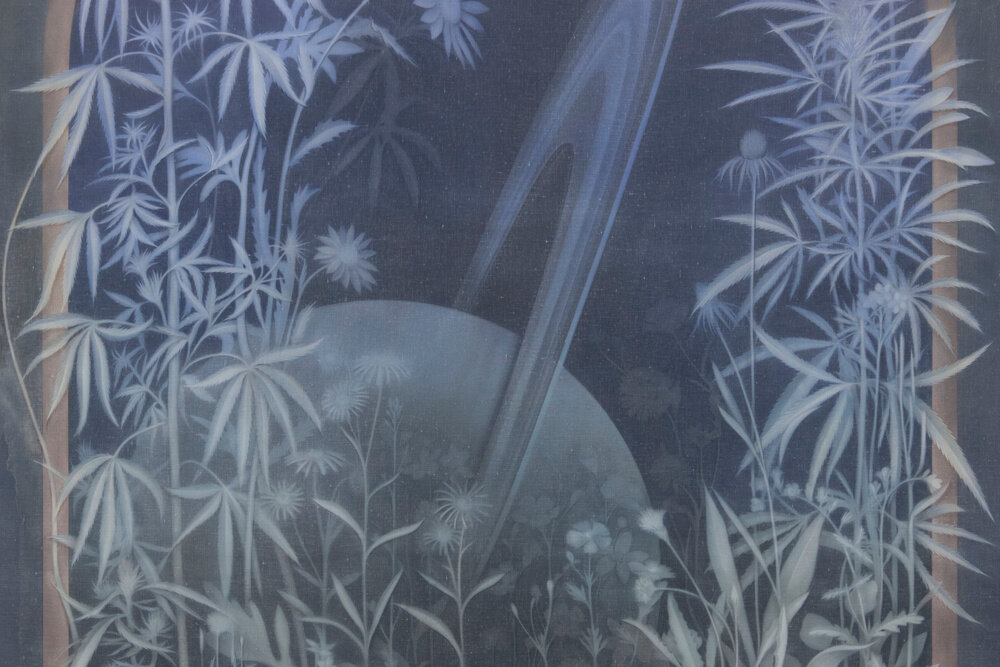