Forbes: Robert Colescott and the Florida Highwaymen in Sarasota, Florida

Robert Colescott and the Florida Highwaymen in Sarasota, Florida
By: Chadd Scott

Robert Colescott was a brilliant painter before he went to Egypt in 1964.

After visiting Egypt, he became an original. A flamethrower. The artist who now perhaps most deserves a complete reassessment of his position in American art history.

What happened in Egypt?

Colescott spent a year as Faculty Artist in Residence at the American Research Center in Cairo. It was his first time spent around a majority Black population. The experience revolutionized his racial identity.

Previous to Egypt, Colescott (b. 1925, Oakland, CA; d. 2009, Tucson, AZ) assumed a white identity. Light-skinned with multiracial parents, Colescott could “pass” for white in Jim Crow America. When he entered the U.S. Army to fight in World War II, he selected “white” as his race on personnel documents.

His pre-Egypt paintings could have been produced by anyone possessing his rare talent.

“Why he decided in the midst of a kind of explosion of expression of Black identity to choose a much more caricatured, satirical (style) is fascinating and probably the most challenging aspect of his work,” exhibition co-curator Lowery Stokes Sims told Forbes.com.

Fifty-four works spanning more than 50 years of Colescott’s prolific career–pre and post-Egypt–can be seen through October 31st at the Sarasota Art Museum of Ringling College during the exhibition, “Art and Race Matters: The Career of Robert Colescott,” the first comprehensive retrospective of his career. The show explores the work of an artist who—through vibrant paintings laced with biting satire—confronted issues of race, gender, identity and the uncomfortable realities of U.S. life in the latter half of the 20th century.

“(Colescott) really gets at us; we can’t merely point the finger at Bob because the reactions we have to the work reveal something about us as well,” Sims, who during the course of her legendary career as a curator, museum director and historian, befriended Colescott in 1979, explains. “He always was one to tweak what your reaction was and to put out ideas that you might have about any subject that might have been not necessarily the most politically correct or the most sensitive, and he puts it out there first and then you have to confront the fact that maybe, secretly, you did have those feelings about that.”

The presentation begins with pictures completed following his return to the Bay Area after military service. He enrolled at the University of California at Berkeley on the G.I. Bill, earning his Bachelor of Arts in 1949. He next spent a year in Paris at the atelier of legendary modernist painter Fernand Léger, returning to Berkeley and earning a Master’s degree in 1951.

Among works on view from this period, a solemn, sublime, ravishingly restrained still life, White Bowl (Distance Traversed), shows everything which need be known about Colescott’s skill with a brush.

That skill would be overshadowed by the bombast and provocation of his later paintings. The post-Egypt paintings.

The artworks which fill the remainder of the exhibition empty a toolbox of subversive appropriation of existing imagery from pop culture, mass media and the art historical canon, reclaimed racist stereotypes, lampooned mythologies about Blackness, and chuck them back at viewers.

Cactus Jack in El Dorado (1977), Shirly Temple Black and Bill Robinson White (1980), Knowledge of the Past is the Key to the Future: St. Sebastian (1986), School Days (1988), Beauty is Only Skin Deep (1991), Colescott’s work frontally assaults onlookers, a fearless exposition of social and racial inequality, class structure and the human condition through his often manic style of figuration.

Colescott’s most famous painting, George Washington Carver Crossing the Delaware: Page from an American History Textbook (1975), acquired at auction in May 2021 by the soon-to-open Lucas Museum of Narrative Art in Los Angeles for $15.3 million is not included in “Art and Race Matters,” but a study for it is.

Starkly contrasting the bare-knuckle instigation of Colescott’s imagery is his pervasive use of pink. Recalling the children’s medicine Amoxicillin, Colescott uses this color not only as underpainting, but liberally throughout the span of his post-Egypt career. An iron fist in a velvet glove. His paintings are vibrantly, joyously colored; it’s the subject matter that is dark.

And not always compatible with contemporary mores.

His women are objectified. Gratuitously sexual. Bordering on pornographic.

“It was very challenging in 2018-19 to figure out how to curate a show that was true to (Colescott), but also to understand that we were going to be showing this work in an environment that had a different perspective on race and gender,” Sims said. “The ‘Me Too’ movement was gaining steam… we had to consider a way to represent his work, but at the same time not provide a flash point that would negate any other dialogue that would happen around his work.”

As Colescott reascends the canon–he earned a pinnacle achievement being chosen to represent the United States at the 1997 Venice Biennale before his prominence faded in the early decades of the 21st century–his treatment of women will need a reckoning.

For Sims, the complicated conversations about sex and race brought about by Colescott’s work should be embraced, not avoided.

“I was attracted to the transgressive nature of his work as a Black woman who branched the accommodations of the Civil Rights movement and the daringness of the Black Power movement and all the ways I was expected to be a credit to my race and behave myself,” she said. “When I saw his paintings, it gave me a sort of vicarious, rebellious feeling about all the things I was supposed to be leery of and stay away from.”

“Art and Race Matters: The Career of Robert Colescott” is accompanied by a fully illustrated 252-page catalogue published by Rizzoli Electa. Featuring the contributions of more than ten curators and writers, including a major essay by Sims, and a selection of writings by the artist himself, the publication is the most comprehensive volume devoted to the life and work of Colescott to date. 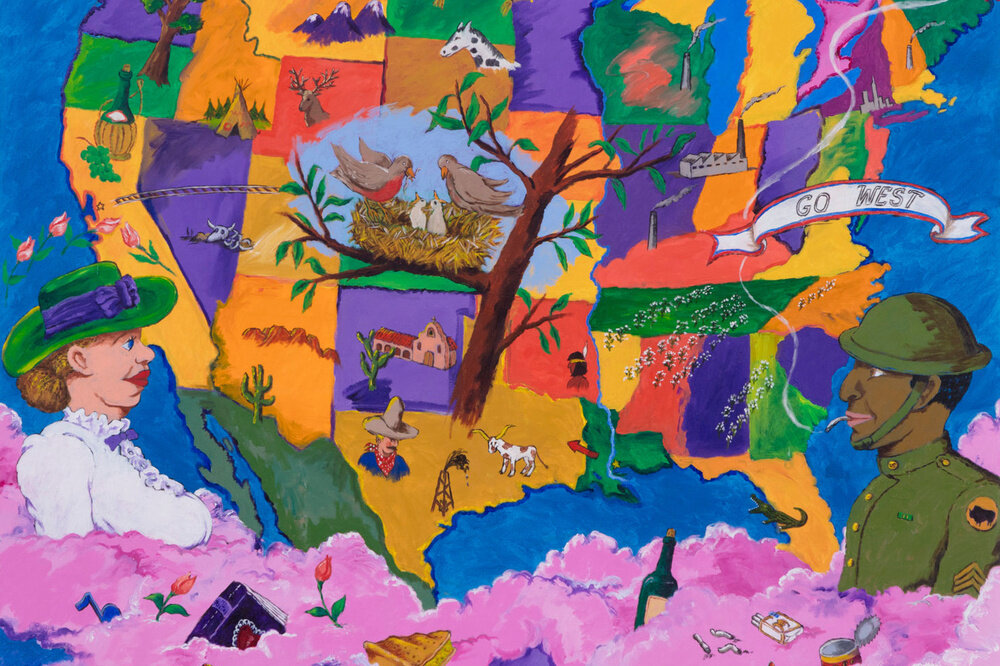