While the main charm of the 59th Venice Biennale lies in its flagship show, the International Art Exhibition, as well as the exhibitions put forth by 80 participating national pavilions, the city has plenty more to offer.

Numerous satellite shows are staged across Venice’s winding labyrinth of palazzos, alleyways and bridges to coincide with the central exhibition, including 30 “collateral events” that have been officially approved by the biennale.

Among such shows, four are dedicated to the trailblazers of Korean modern art. Here’s a day-long walking tour that can be planned out to enjoy the works of Korean art masters nestled within the classical Venetian palaces.

The trip begins in the heart of Venice at the Palazzetto Tito.

It is here where the retrospective of Ha Chong–hyun is taking place as one of the Biennale-approved collateral events featuring a Korean creator, with the support of Venice’s Fondazione Bevilacqua La Masa, the Seoul-based Kukje Gallery and the New York-based Tina Kim Gallery.

While predominantly known as a master of “Dansaekhwa” (monochrome painting), Ha’s work spanning over six decades is best described as a ceaseless exploration and experimentation with materials—an artistic journey that has been heavily influenced by the country’s turbulent history, following the 1950-53 Korean War.

Accordingly, the retrospective, curated by Kim Sun-jung, aims to present the full breadth of his multifaceted creative journey, from his lesser-known “Naissance” series of the late 1960s to the evolution of his world-renowned “Conjunction” series that continues to this day.

“I first came across Ha’s works when I visited the 45th Venice Biennale in 1993. This was two years before the Korean Pavilion was established, so his exhibition was located in a small corner at the back of the Italian Pavilion,” Kim said.

“It is inspiring to see how far Korean art has come and grown over the past two decades. Back then, there were almost no satellite exhibitions like this one featuring Korean artists.”

In the late 1950s, Ha initially pushed himself into the realm of gestural, non-geometric abstract painting in the style known as “Korean Informel.” Throughout the next decade, however, he shifted his practice to explore Korea’s traditional decorative art like Dancheong—pattern-drawing on wooden surfaces based on five colors reflecting the philosophy of five fundamental elements—as seen in “Naissance.”

As a founding member of the artist collective AG (Avant-Garde Association) in 1969, the creator began to experiment with giving a sense of three-dimensionality to his paintings with non-conventional materials—barbed wire, plaster, newspaper and burlap bags—which were found to be far more accessible in postwar Korea than any other imported resources.

It was this decision, made based on the accessibility of materials that eventually led Ha to invent a unique artistic vocabulary, “baeapbeop” (back-pressure method). The technique became a formative element for his trademark “Conjunction” series that began in 1974.

Baeapbeop involves applying thick oil paint to the back of a hemp canvas and pushing it with the likes of a wooden spatula through the cloth’s coarse weave, thereby creating beads of paint seeping into the front surface.

At the Venice show, different stages of his “Conjunction” series can be witnessed, from his earlier pieces that utilized muted, earthy tones recalling traditional “giwa” roof tiles or white porcelain from Korean history, to the present-day incorporation of spirited colors and even thinly cut wooden shims onto the canvas to give more rhythmic dynamics. 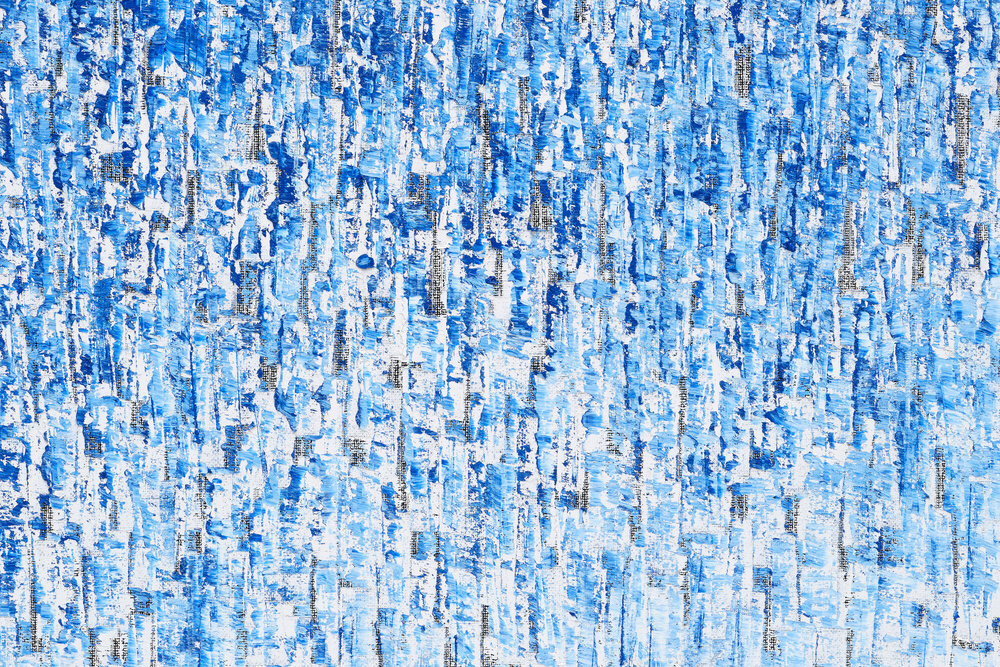